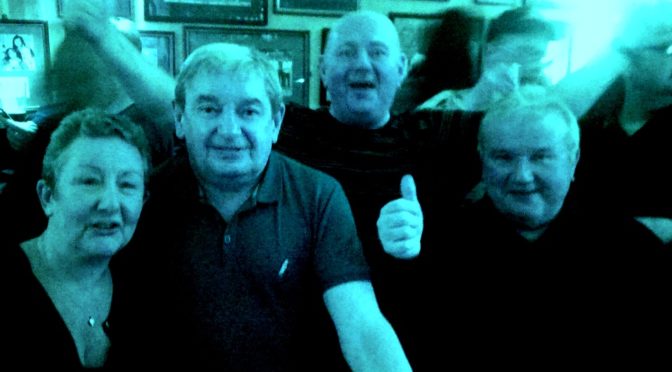 Ken Bruce favourites Steely Dan turn up in the Joker & Thief music round tonight. This is what it sounds like:

I don’t know how many of you listen to Ken Bruce – he does the mid-mornings on BBC Radio 2. Ken Bruce has no actual age – he has been exactly the same entity since he began broadcasting nationally in the early 1980s.

He is the overseer of Popmaster which is the daily music quiz that’s on between 1030 and 1045.

Don’t ever phone me between those times because I won’t answer, I’m doing the quiz.

If my wife is studying in the kitchen (she’s doing a masters) then she has to get out at 1028 cos that’s the time that I breenge into the zone, whap the kettle on and get the tranny fired up.

And I can hear you saying: “Come on Doc, tell us about your tranny. Give us some hardware detail.”

The machine I listen on (you would probably call it a “device” these days) is a Grundig Yacht Boy which used to belong to my dad and is now mine.

I love it and I will never chuck it out. even though the missus doesn’t like it (it’s “ugly”).

It’s half nine now, so let’s get this communication sorted so I can get ready for Popmaster.

A few stretches, a coffee, you know.

By the way, if you do like Popmaster, I sell scorepads on my other website. They are great. 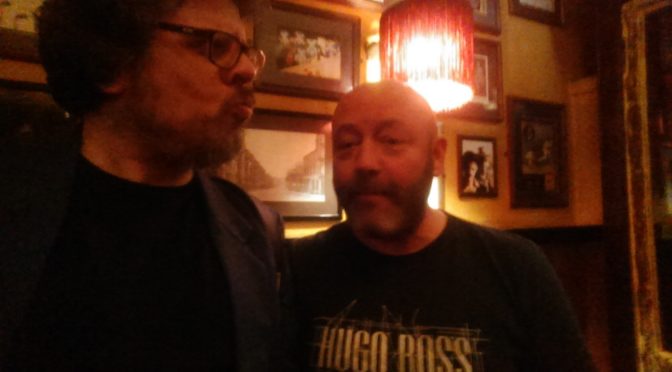 If you read the website or get the email, you’ll always be one answer ahead.

This is because I publish a free answer for each quiz on the morning of the quiz. (see tonight’s clues above)

Here’s the video to go with the music round clue which is from Faith No More, who used to be famous rockers from the USA:

The song is called “Epic” and comes from 1989 when mixing up rap and rock was still pretty novel.

I quite like the very end of the video where he gets out of the way of the piano just in time.

Another reminder: The Raging Bull quiz changed it’s start time a couple of weeks back. It now starts at 8pm. Don’t miss out on the big jackpot there tonight.

It’s for the music round at the Joker and it’s Aussie double-act The Veronicas:

Fun fact: neither of The Veronicas is named Veronica. Their names are Lisa and Jessica and they are twin sisters.

Here are some sister and brother acts, together with their real – or-not-real status:

There are loads more. I think I’ll write some questions on the subject. Look out for them in future weeks.

Won’t be any tonight though – quizzes are written a month ahead of time. 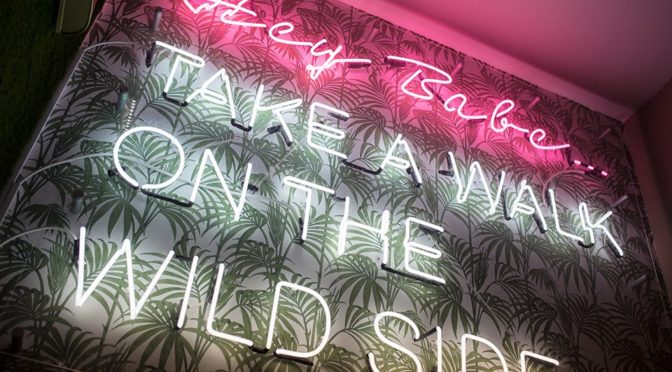 Michael is now up and running on Wednesday nights at the Raging Bull on Lothian Road. It’s a nice boozer and if you’re anywhere near Tollcross you should check it tonight.Quiz is at 9pm.

Here’s the detail for the music round cheat tips: First of all it’s worth pointing out that the music round at the Joker and the Thief tonight is all about Eurovision and all the answers are countries (all the songs are WINNING songs). This 2011 winner is from Azerbaijan:

Like I say, all the tracks in the Joker/Thief music round tonight are Eurovision winners so it might be worth nine minutes of your time watching this video

The other music round clue for tonight refers to the music round at Brass Monkey and is this ultra-90s song by hip-hop collective K7:

This may have been what street life was like in Los Angeles in the 1990s, but it didn’t look like that in Glasgow, I can tell you.

That’s me pasting up flyers for the first night of our club ‘Boudoir‘ which ran from approximately ’92-’97 in Glasgow.

It’s amazing that we are all still alive. Celebrate longevity – come to the quiz tonight. See you later at my quiz or go and see Michael at the Raging Bull. 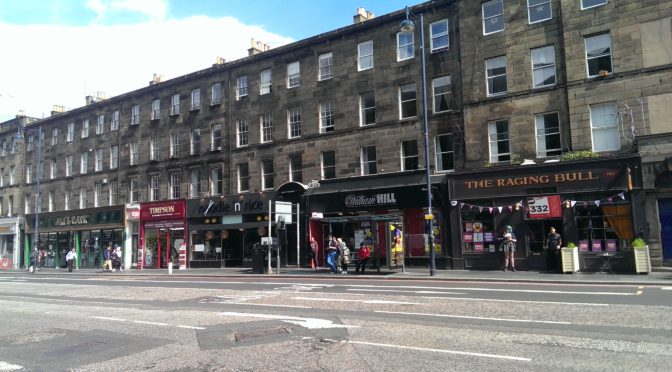 Michael was scheduled to start the Wednesday quiz at the Raging Bull last week, but circumstances prevented this so the first quiz will be tonight.

The Raging Bull is towards Tollcross – it’s on the left as you’re heading up Lothian Road and it used to be Moriarty’s but it feels a lot nicer now. They have lots of delicious booze including speciality cocktails and they also do snacks. Quiz is at 9pm.

Here’s the cheat tip: Tori Amos is in tonight’s music round at the Raging Bull on Lothian Road:

Although it topped the chart as a Tori Amos song, this version was created by Armand Van Helden. It bears virtually no resemblance to the originalwhich is great in its own way and kind of sounds like PJ Harvey.

The youtube comments on the dance track (the number 1 version) are full of people saying how they mis-heard the lyric.

“Honey, bring me toast and my elixir”

” Are you bringing toast tonight?”

The real lyric is ” Now honey bring it close to my lips, yeah. Got to be big”, but people are hearing toast and fish.

If we had time, we could analyse this and draw a weighty conclusion about the human condition. But, it’s nearly 10 am -so I’m just going to get on with posting this.

And if you win the jackpot tonight you could buy some really nice toasting bread and some LOVELY fish and have a real good fish toastie.

And have enough money left over for a wee trip to the seaside.

And that’s because dreams come true at the quiz.

So anyway – if you’re anywhere near Tollcross tonight, please go and visit the Raging Bull and give young Michael a boost at his first quiz. 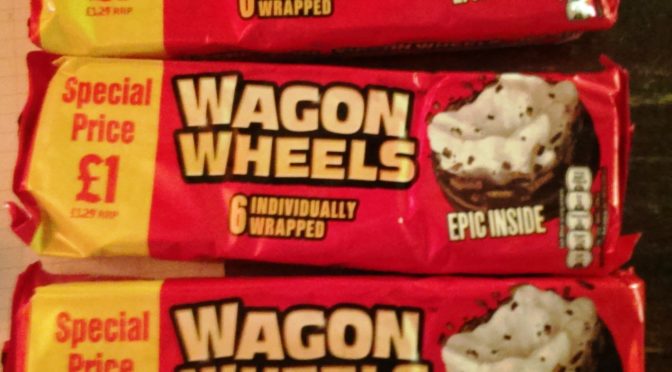 Here’s the cheat tip: The Coral are in tonight’s music round at the Joker:

Tune’s a banger. Here’s the video:

The Coral were, I believe, from Liverpool and had a few hits. They were the next big thing. As were The Thrills, The Zutons, The Electric Six and even Starsailor.

They are all now working in A&R. That’s the way rock and roll goes.

Some of them are probably doing tech at the Fringe.

Some of them probably have highly lucrative careers writing the hits but not fronting them.

Write the genius once and then sit at home harvesting the moolah wile some other dope handles the touring and the adulation.

One day I hope to organise my quizzes this way.

But for now, you can witness my nose to the grindstone four nights a week, including tonight at the Joker. 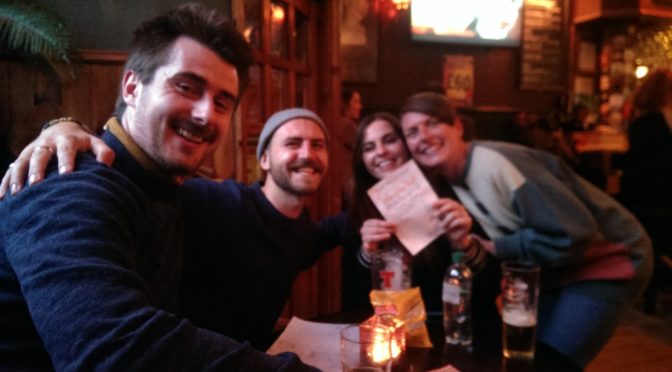 Cheat tip: Here is the Arctic Monkeys song which features at the Joker (7pm):

Typical Arctic Monkeys. I always want to hate them because they seem contrived but, to be honest, the tunes are decent. Fair play.

Someone who really does get on my tits is Taylor Swift. One of her ouvres turns up tonight at the Brass:

Ach, this song is actually decent. Maybe she’s all right.

Goddam? Why am I in such a nice mood today?

Maybe cos Shawn’s back at the Damm 27 tonight after some hiccup last week.

Slam you opponents to the canvas. Tonight. 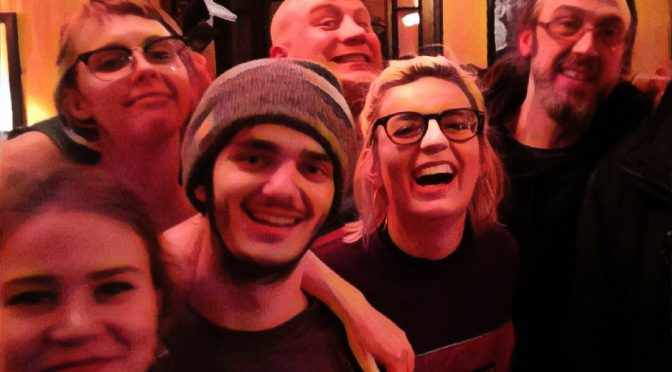 Cheat tip: Here is the Soft Cell song which features at the Brass Monkey (9pm):

Anyway, make sure your team consents to showeing up to the quiz tonight. Don’t drag them to the pub on a long black lead. Not unless they like it that way.

By the way – Damm 27 is shut tonight for “structural reasons” – Damm 27 hosted by Shawn will return next Wednesday. 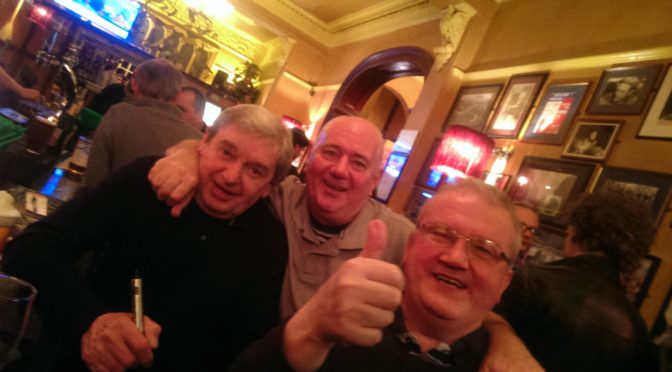 Three quizzes tonight, each with the different flavour.

The Joker is one of the week’s most relaxed quizzes. Enter Roddy’s realm and order a pizza. It’s very satisfying.

Damm 27 is the stomp of new young quizmaster-of-tomorrow, Shawn. Regulars who have been to Shawn’s quiz describe him as very likeable.

The Monkey is just full of students and pissheads.

So, here’s tonight’s free answer for the music round at Damm 27:

Nice bonus John Peel at the start of that video.

Meanwhile, here is the free answer for the music round at tonight’s quiz at the Joker:

So, everything’s cool and we’ll see you tonight at one of the quizzes. Remember: WHO advice is to get out at least once a week. Midweek is a good time for this cos the weekend is just full of fannies and pricks. 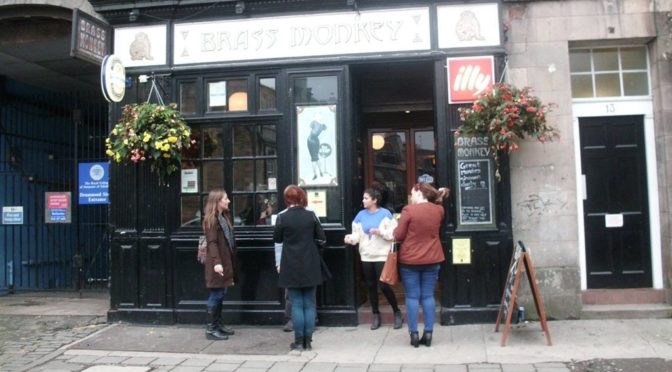 Here is the free answer for tonight’s music round at the Joker . It’s the ELO who properly be proclaimed only as the “The Mighty ELO“, and preferably in an Alan Partridge voice or a Smashy/Nicey voice.

Remember: Wednesday is for winners.