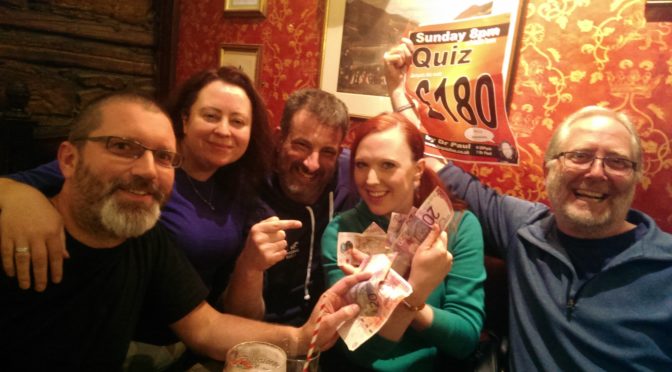 By the way, here’s the audio cheat for tonight which refers to the music round at the Persevere:

Although, to be honest, they might have been cheaper just going to Falkirk in February for exactly the same effect.

I’ve just looked up their band on Wikipedia and it’s one of those bands that you’re surprised are still together, five albums later, despite the fact that fewer and fewer people buy the records

I’m no stock-market analyst but this points to a downward trend. Who will back them to make the top 20 with their next release?

When will they give in and become producers or teachers or quite music altogether and retrain as finance brokers?

I don’t know and to be honest I’ll probably never think about them again after I get to the end of this sentence.

This is what we live for.

See you at the quiz tonight!

Anyway – none of that attitude at the quiz tonight. Great riches await. See you there!

Can you spot the difference? Which of these teams finished last at Brass Monkey Leith last night and which were the winners?

Use your interpretive-visual skills to answer.

Take away lesson: “Body Language” is not made up. YOU CAN READ this stuff.