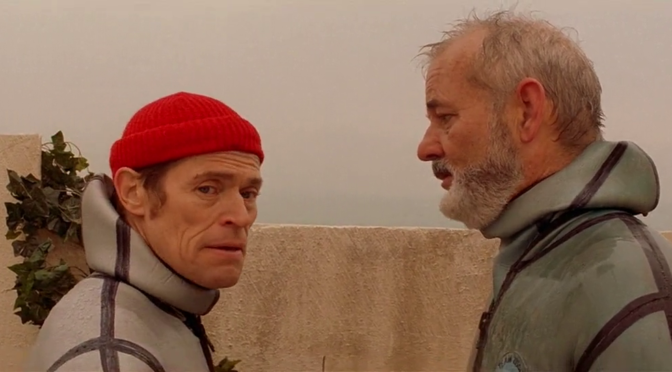 Well done to The Chameleons who won the big money at the Argyle last Thursday. Everything is back to normal now.

Remember: Valentine’s Day is a real thing. Buy him/her a rose. Take him/her to the pub quiz. She/he will love it and, by extension, you.

Here is the cheat music help for tonight. It refers to the music round at the Newsroom and it is Cream:

Pretty much the greatest film ever made. Did I say that last week? Of course I did. But this is better.

This is one of a handful of films that I paid money to see at a cinema twice.

When I watched this in 2004 I was amazed, knew the missus had to see it, so I took her and saw it again the very next day. I don’t think she liked it as much as I did.

Wes Anderson has probably made “better” movies. I saw ‘Grand Budapest Hotel’ and ‘Moonrise Kingdom’ and I remember thinking at the time that both were better than Life Aquatic but Life Aquatic still remains in my head in a way that the others haven’t.

Mind you, it was probably the first Wes Anderson film I’d seen so I hadn’t become jaded about the style which, admittedly, gets slightly samey the more of his movies you watch.

One thing that makes the film stick is the music. You’ve got the guy doing the Bowie songs in Portuguese and that’s pretty cool but it’s the Mark Mothersbaugh electronic soundtrack stuff that proper got me and still rocks me.

The film is basically a father-son drama (which so many of Anderson’s films are) but, under Bill Murray’s reign as king of his own boat, there is a special, believable madness which draws you in and an attractive disregard for real geography, and real oceanography.

Here is a tour of the boat:

The film is so utterly and obviously completely made-up, but equally feels just about real and possible and you end up sympathizing with nearly everyone in the film. There are no real heroes or villains, everyone is suffering one way or another.

Owen Wilson feels, for once, that he’s not just playing Owen Wilson. All the casting is perfect. It’s a film that makes you wish you were part of the team in the film, in this case the crew of the Belafonte… which is the opposite of last week’s film Das Boot where every fibre of your viewer’s body makes you glad you are NOT part of the crew.

Although it is sad, and people do die.

I would watch this film again in a moment. Maybe I’ll watch it when I get home from the quiz tonight.