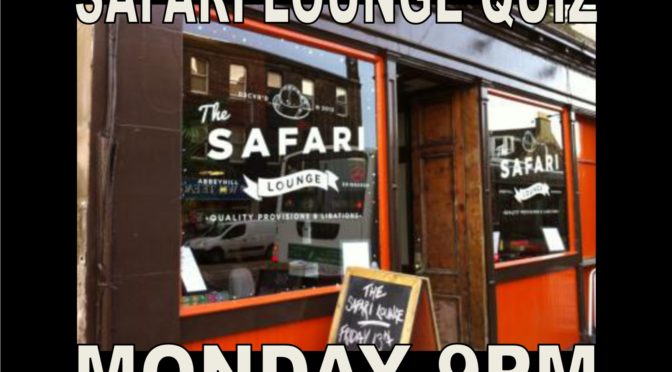 The significance of Monday as a generally understood cultural touchstone is diminishing.

This occurs as more people work flexibly or don’t work at a ll or have three or four jobs just to pay the bloody rent and council tax.

Does anyone still do Mon-Fri 9-5? I’m sure there are some of you.

But whether you’re drowning in the gig economy or kept honest by the nine five routine, the quiz will ALWAYS be there for you on Monday nights. That’s my Dr Paul promise.

Speaking of Mondays, there will be a new gig starting soon on Mondays which will feature a quizmaster who is NOT Dr Paul. More details later but if any of you would ALSO like to be a quizmaster, then let me know. Opportunities are becoming available.

Meanwhile, here is the cheat music for tonight’s quiz at the Brass Monkey. You’d probably get it anyway. It’s Avicii.

Fun fact about the song, straight from Wikipedia: The song is written in the key of G minor, at a tempo of 125 BPM.

This should be handy information if you intend to “jam” along to the “track”.

Speaking of hip, I don’t tihnk some of you realise just how damn hip the Safari Lounge is. What a boozer. It’s got everything you need to get pished in a hip way without resorting to being a hipster wank.

Seriously, if I was still in the market for getting as pished as possible, there’s every chance I’d be doing it midweek style in the Safari.

They have a crocodile head on the wall, for goodness sake.