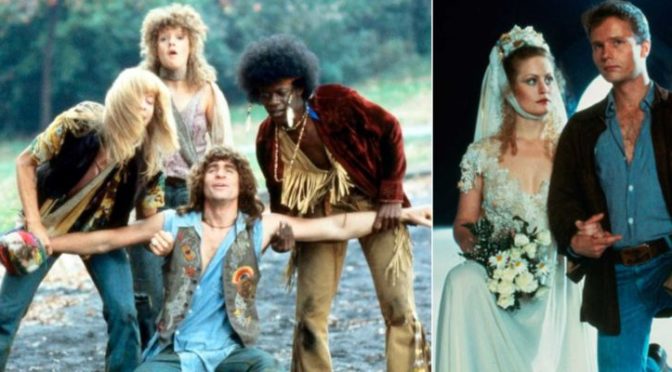 The cheat answers for tonight include this song by Chef out of South Park:


The song is about snacks but also kind of about his bollocks. This is why South Park became so popular in the late 90s. There wasn’t much else to do.

Anyway, as dedicated readers will know: Thursday now MOVIE Thursday: I’m in the middle of a list of my ten favourite films of all time.

Definitely the greatest film ever made. It’s got a pounding soundtrack, hippies who appear to live wild in New York City, life death, babies and LSD trips mixed up with the Hare Krishna tribe.

I think I watched this once a month during 1994 which is when my group of friends discovered this movie that by then was already a relic.

I was too young to be a 1970s hippy but I’d been vaguely fascinated with this subculture before. My favourite character out of ‘The Young Ones’ was Neil and what teenager doesn’t want to be Danny out of ‘Withnail And I’?

But this American film gave a new spin to my understanding of 70s hippies: they could also be cool, blag their way into high-society parties and execute some pretty nifty pre-rehearsed song-and-dance routines.

The film evolved from an earlier stage musical. Apparently the musical’s writers thought the film wasted the original story and was a poor adaptation but I’ve seen a stage production and it was tedious compared to this grand entertainment.

Watch it but don’t ask for it to make much sense at all until it gets near the end and suddenly there is a real and possibly fatal human drama on top of all the sexy foolery of the last hour.

If the movie didn’t thump you with big emotions at the end it would probably be worth a single watch. But the heartbreak keeps me coming back, as do the songs and the mad set pieces.

The horse ride in the park for the song ‘Sodomy’

The bit where Woof won’t have his hair cut for a short spell in jail and is subsequently interrogated to find out if he is gay. He sings his way out of trouble, of course:

There’s load more but you have to watch the film. It’s the greatest film ever made and I fear that I have left no room to improve for my top 3. I’m gonna have to think hard to come up with something for next week.

The big jackpot got won last Monday by the Organ Grynders but there’s still fun, cash, love and warmth to be had at the quizzes tonigt:

7pm Brass Monkey Leith.  £50 Cheat: In the picture round there is your favourite French Existentialist Philosopher, Jean-Paul Sartre.

9pm Safari Lounge. Jackpot: £90. Cheat: The music round includes The Kinks at their most hippy. See the video below to hear the song.