On a night of Rude Team Names at the Blind Poet, UP THE BUM NO BABIES were pipped at the post for the case of Heineken by OPEN YOUR MOUTH OR ITS GOING IN YOUR EYES.

Good work by everyone and comiserations to MINCE AND TATTIES whose Texas Cowboy, Amir just missed out on the £52 through an unfortunate lack of North Atlantic knowledge. 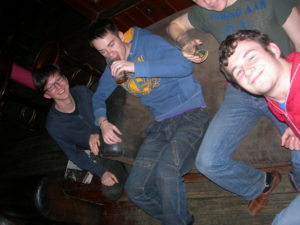 There’s £43 in the pot so the jackpot this Sunday night should be up to £60 at the Blind Poet. Come along and have a go.

Tonight is bring a foreigner night. You get one point for every non-Brit in the team.

Skinny December issue is out… soon; and I have collaborated with one of their writers, Finbarr, to write the Skinny Quiz of the Year.

Look out though, it’s a bit more cultural than my usual trash: there are questions about opera, theatre and everything.

Four teams battled it out at the SCH last night, including a pair of Israelis who came last but definitely scored the highest ever score by an Israeli team at the quiz.

In the end, it was NORWEGIAN CHEESE who took the title, ruthlessly pouncing on the mistakes of the G&T’s like a tiger on a chicken. The vodka was theirs.

And this week, the G & T’s didn’t even have an Irish element in the team to take the blame.

I’ve heard the bar is getting a refurb which will make it more like a ‘style bar’ and less like a hotel foyer. This will be happening in December. Quiz moves to Thursday next week for one week and then we’ll be back in January.

The well-bred environs of South-Central Edinburgh rocked to the power of a man last night, and that man was Alex.

His team, the FENNEL FRONTIER had drawn for first place, but Alex took the bull by the horns and spat in the opposition’s chips by inventing a new type of dancing which had never been seen in the First World.

Alex refused to stop there and won through to the ultimate question but unfortunately that’s where his luck ran out.

Phil Collins, destroyer of worlds, was victorious again and the rollover is £60 for next Monday. Beast.

By the way, I didn’t get any film of Alex’s style but here’s a flashback  from the old days in Glasgow featuring dance-off another legend… George.

After a few weeks of rollovers (mainly caused by Fa La La’s inability to answer the Ultimate Question), the £jackpot was finally scooped by super champions DO THEY KNOW IT’S QUIZMAS.

There they are, having killed Phil Collins and pissed on his grave. The booze, the cash were theirs but such was the shocking nature of the Marmalade joke, that they did NOT get the jokes prize.

Despite the name, the team are NOT donating any of the money to Africa.

Come and meet Beata and Ruby behind the bar and have a crack at the quiz where the outcome could be settled by a single dart.