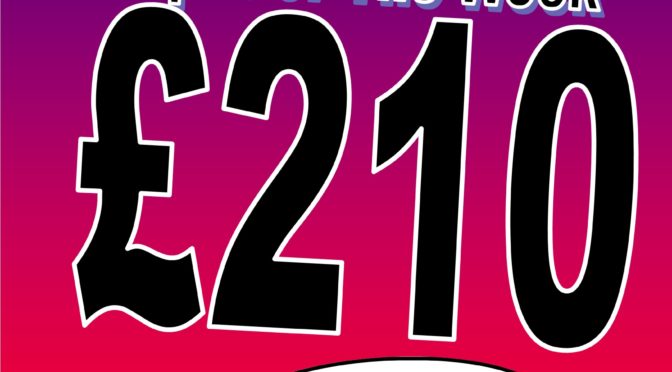 Big £210 at Portobello Tap tonight. I understand the pub is now NOT taking bookings for tables as they were all booked last week. Best bet is probably to get there as early as you can.

Hey – the next few days are your chance to play Dead Pool for November. Did anyone have Abu Bakr Al-Bagdhadi for October? I’ll check the list and let you know.

The first is for the Brass Monkey Leith:

The American band Sixpence None The Richer are still on the go despite having just the one big hit, and that being more than 20 years ago.

But you don’t care about that. what you want to know is: “what is that band name all about”?

According to Wikipedia the origin of the band’s name is as follows:

“It comes from a book by C. S. Lewis called Mere Christianity. A little boy asks his father if he can get a sixpence—a very small amount of English currency—to go and get a gift for his father. The father gladly accepts the gift and he’s really happy with it, but he also realizes that he’s not any richer for the transaction. C.S. Lewis was comparing that to his belief that God has given him, and us, the gifts that we possess, and to serve him the way we should, we should do it humbly—realizing how we got the gifts in the first place. “

Which sounds like a right old pile of wank, but you can’t have everything, can you?

Meanwhile the Portobello Tap music round will contain this song by ZZ Top:

The ZZ Top thesis in this oeuvre point to the fact that “Every girl’s crazy ’bout a sharp dressed man“.

Basically – if you want laid, get your suit on.

I’m not sure if the theory has been accepted, proven or disproven by mainstream science but dressing in suits remain popular, so maybe it’s true.