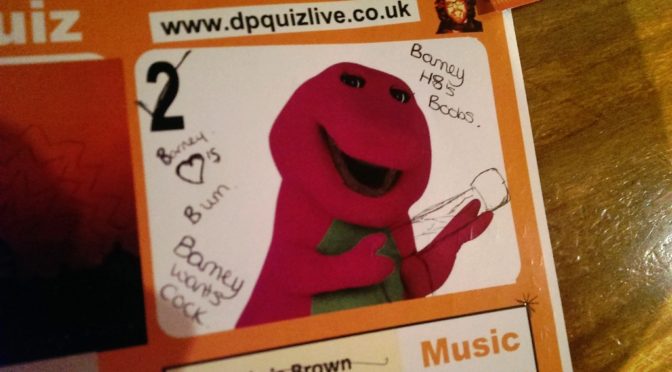 Cheat tips: First of all, here is the Billy Ocean which features at Damm 27 (9pm):

Billy Ocean has been confirmed by professional scientific geographers as being the deepest, the biggest and the best ocean in the world. In this song he sings about the Caribbean Sea, which is wayyyy smaller than him.

The other music round cheat clip for tonight refers to the quiz at the Brass Monkey. It’s a film music round so tonight you have to name the film. This is one of the songs, which comes from Rocky IV:

This entrance was recently riffed by Tyson Fury before his Las Vegas fight with Tom Schwarz, which was cool. Also, Fury’s bout had a happier ending.

My own entrance music tonight will be somrthing less epic. I’ve been listening to a lot of Italo Disco this week so it might be something like that. You love it.

I don’t know if Shawn uses entrance music at Damm 27 but if he does it will be cool, cos Shawn’s cool. Maybe it’s Die Antwoord cos he’s South African and I just imagine that south African people listen to nothing but Die Antwoord all day.

Remember, country’s about to be exploded to death by whatever Tory wank gets into number 10, so you might as well go out now while you can…

ROUND THE GROUNDS QUIZ - name the stadium?

FACT: At the opening ceremony for the 1988 Seoul O

When was the last time you went up town? I've not

The Flumps world of alternative politics.

What's the strangest pet you've owned or known? I